What is macular degeneration?

Macular degeneration often called AMD (for age-related macular degeneration) is a deterioration of the macula which is the central part of the retina at the back of the eye that allows one to see fine details clearly and perform activities such as reading and driving.

What is the incidence of AMD?

AMD is the leading cause of vision loss and blindness of Americans age 65 and older. Since older people represent an increasingly large percentage of the general population, vision loss associated with AMD is a growing problem. In 2004, it was estimated that 1.75 million U.S. residents had significant symptoms associated with AMD, with the number expected to grow to almost 3 million by 2020. Approximately 10% of patients 66 to 74 of age will have findings of macular degeneration. The prevalence increases to 30 percent in patients 75 to 85 years of age.

What are the risk factors for AMD?

Strong risk factors include aging, smoking, and a family history of AMD. Genes have also been discovered which are strongly associated with a person's risk for developing AMD. Possible risk factors include exposure to sunlight (especially blue light), hypertension, cardiovascular risk factors such as high cholesterol and obesity, female gender, non-hispanic whites and farsightedness. It should be noted that African Americans are much less likely to lose vision from AMD than Caucasians. 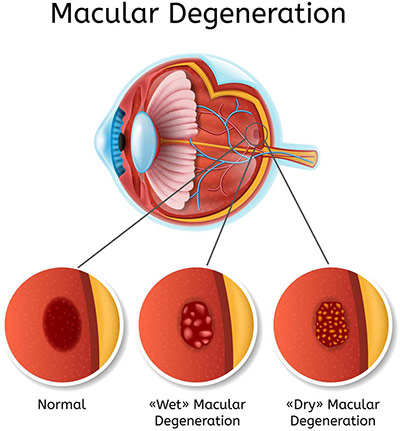 What are the types of AMD?

There are two basic forms of AMD: "dry" AMD and "wet" AMD. Eighty-five percent to 90 percent of AMD is the dry form. It is caused by aging and thinning of the tissues of the macula. Vision loss is usually gradual. A primary lesion appears to occur deep to the retina with the deposits known as drusen. Drusen are thought to be metabolic by products that result over many years from chemical reactions that occur when light stimulates the retina. Patients with dry AMD must be monitored closely as the condition may deteriorate in to wet AMD. The wet form of AMD results when abnormal blood vessels form underneath the retina. These new blood vessels leak fluid or blood and blur central vision. Vision loss may be rapid and severe.

What are the symptoms of AMD?

AMD can cause different symptoms in different people. The condition may be hardly noticeable in its early stages. Sometimes only one eye loses vision while the other eye continues to see well for many years. AMD usually produces a slow or rarely sudden painless loss of vision. Early signs of vision loss can include seeing shadowy areas in your central vision or experiencing unusually fuzzy or distorted vision.

Patients sometimes describe a dark gray spot similar to the after affect caused by a flash bulb. There may be other changes in vision such as the size of an object appearing different for each eye or difference in colors between the two eyes. These changes in eyesight are important symptoms and anyone who has such symptoms should make sure they see an eye doctor promptly.

Although AMD reduces vision in the central part of the retina, it does not affect the side or peripheral vision. Therefore, AMD alone does not result in total blindness. Even in more advanced cases, people continue to have some useful vision and are often able to take care of themselves.

How is AMD diagnosed?

The diagnosis of dry AMD is made on clinical findings alone by examination of the retinas using specialized equipment. A simple vision test with a chart that resembles graph paper (Amsler Grid) can quickly assist the physician to make a diagnosis of AMD. When the physician suspects wet AMD, a fluorescein angiogram may be performed to look for leaky or bleeding blood vessels beneath the macula. There are also newer imaging studies that can see beneath the surface of the retina to assist in the diagnosis of wet AMD. This technology, known as Optical Coherence Tomography (OCT), is quick and painless.

How is AMD treated?

Although the exact causes of AMD are not fully understood, antioxidant vitamins and zinc may reduce the impact of AMD in some people.

The 10-year Age Related Eye Disease Study (AREDS 1) found that people with moderate to severe AMD lowered their risk of progression by about 25 percent when treated with a high dose combination of beta carotene, Vitamin C, Vitamin E and zinc. Among those who have either no AMD or very early AMD, the supplements did not appear to provide an apparent benefit. Nutritional supplementation is the primary treatment for dry AMD. Consuming green leafy vegetables is also thought to be beneficial. In 2013, the results of the AREDS 2 indicated that removing the beta carotene and adding lutein as well as zeaxanthin were even more beneficial in preventing progession of AMD.

The treatment of wet AMD is more challenging. There are, however, new exciting treatments that continue to evolve. Initially, wet AMD was treated with laser treatment to seal the leaky blood vessels. Unfortunately, treatment can produce scars in the retina which are perceived as blind spots by the patient. In addition, the recurrence rate of wet AMD with this treatment is as high as 70%. Photodynamic therapy (PDT) involves injecting medicine into the patient's vein and then shining a non-thermal laser light into the eye to produce a chemical reaction which destroys the abnormal blood vessels. This treatment is more protective to the healthy retinal tissue compared to the traditional laser treatment.

It is now known that a protein known as vascular endothelial growth factor (VEGF) is responsible for the proliferation of abnormal blood vessels under the retina. There are now new anti-VEGF medications that can be painlessly injected into the eye to make the normal blood vessels regress. These new medications may slow the rate of visual loss or even restore vision.

Studies with an implantable miniature telescope to provide magnification for patients with AMD may prove to be beneficial.

Research to develop artificial retinas and methods of stimulating the retina for those with macular degeneration are increasing. Investigation with an artificial silicone retina microchip which is implanted under the retina has shown that stimulating healthy retinal cells can restore some vision to those with AMD.

Low vision devices for patients with AMD can also be very helpful. With the use of magnifying devices with bright light, patients frequently can see better. In addition, some devices can shift images outside of the central blind spot to the periphery to allow patients to see better.

There may also be a role for surgery in patients with AMD. In one type of surgery, the abnormal blood vessels and blood clots underneath the retina are removed. Another type of surgery called macular translocation actually involves moving and separating damaged tissue from healthy tissue as a way to preserve visual function.

AMD is a serious eye problem with incidence on the rise. AMD can cause loss of the detailed central vision and therefore affect one's ability to function. Since a timely diagnosis may determine one's prognosis, it is imperative to seek the services of an eye physician when one notices a change in their vision.

Zusman Eye Care Center is a state of the art facility providing a variety of services ranging from routine eye exams to medical and surgical treatment of eye disease. Dr. Zusman specializes in no stitch, no needle, no patch cataract surgery under topical anesthesia. He also performs laser surgery and eyelid surgery. Additional interests include glaucoma, diabetes, macular degeneration and the diagnosis and treatment of ocular trauma/injuries.

Neil B. Zusman, M.D., FACS is a board-certified ophthalmologist who has been practicing in Charlotte County for 30 years. His office is located at Harbor Professional Centre, 3430 Tamiami Trail, Suite A, Port Charlotte. Patients are welcome to call 941-624-4500 for an eye evaluation.